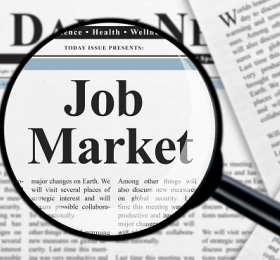 BOOM! That’s what we’ve been waiting for... 916,000 jobs added in March. Furthermore, headline figures from February and January were revised higher to reflect total hiring of 468,000 and 233,000 respectively. This brings the average monthly gain to ~539,000 thus far in 2021… not bad at all. Labor force participation still leaves something to be desired as it is apparent that many “would be workers” are still “opting out” of the workforce. However, hiring on a sector by sector basis was fairly broad based last month and that is encouraging. Leading the way in March was leisure and hospitality with 280,000 new jobs. This was followed by gains in education with 114,000 jobs, and construction adding 110,000 jobs. Given the composition of the payroll expansion, it is not surprising that wage pressures in March remained subdued, though there was a marginal improvement in hours worked per week. The official unemployment rate is now clipping along at 6%, while U6 remains in double digits at 10.7%.

Looking at the US economic scorecard in March, the picture is a bit more mixed. February construction figures, released yesterday, suggest a sharp drop in spending MoM. Those consumer numbers we were worried about last month… were not pretty. Retail sales declined 3%. Home sales fell 18.2% and core durable goods orders fell 1.1%. On the whole consumer spending contracted in February and inflation pressures remained muted at both the producer and consumer levels. However, sentiment among small businesses and consumers is improving and that is very important. Taking a quick look at the industrial end of the spectrum, ISM’s stateside manufacturing PMI saw its best reading since December of 2003! Meanwhile, services remain mired in the uncertainty of the reopening process, but the nonmanufacturing expansion is still intact. Speaking of those PMI’s…

A year removed from the onset of the “Covid Crisis,” it seems worthwhile to take a moment to reflect on some of the economic carnage. We mentioned the indices provided by the Institute of Supply Management (“ISM”) above and it is noteworthy that both manufacturing and nonmanufacturing PMI’s troughed in April of last year (readings >50 indicate expansion, readings <50 indicate contraction). The scope of the contraction in manufacturing was roughly the equivalent of the recession that gripped the American economy at the start of the millennium, whereas the collapse in nonmanufacturing or services more closely resembled that which was experienced during the “Financial Crisis.” Suffice it to say these were two VERY different recessions! Perhaps too much time has been spent discussing the shape of the recovery (and attempting to identify the correct “letter” by which to classify it i.e. U, V, K, etc...). Moreover, it does seem relevant to observe that the broadest segments of the domestic economy, as represented by manufacturing and services, are experiencing (and have experienced) symptoms of two very different recessions altogether. Importantly, we are not talking about the pace or shape of recovery here; we are talking about the root(s) of the problem(s). So, it would follow that the remedies required to provide sustainable recoveries to BOTH of these segments would in turn be different. The conclusion… it is not simply monetary policy or fiscal policy on a standalone basis that can act as a panacea for the pandemic-related economic fallout; it is BOTH. Under the current circumstances and with all of the political noise, this makes the Fed’s job of articulating its position increasingly difficult and necessitates cooperation from Capitol Hill. However, we can be sure that any action from Congress will come with a healthy dose of drama and intrigue as another stimulus package comes down the pike.

With that we wish you a happy holiday weekend!