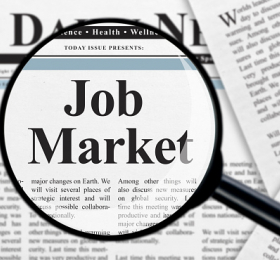 March payrolls suggest the pace of growth in the US labor market is beginning to slow. Employers hired a paltry 103,000 workers to close out the first quarter of 2018. On top of that, the Bureau of Labor Statistics revised its January and February reported jobs figures lower by a net 50,000. The unemployment rate held steady at 4.1% (a constant thus far in 2018) and labor participation came in at 62.9%, which is 0.1% lower than what was reported in the previous month. Average hourly earnings increased 2.7% year over year and weekly hours worked averaged 34.5, which is unchanged from February. Where was the action? Of the 103,000 jobs added, 102,000 came from the private sector. Gains in healthcare, mining, manufacturing, and business services bolstered the headline figure, while dips in retail and construction tempered payroll expansion.

Despite a weak headline jobs figure and resilient wages, the US dollar weakened relative to a basket of developed market currencies, while treasuries firmed and equities sagged. Dollar and equity weakness can be somewhat expected on the heels of a disappointing jobs number but the strength in treasuries is a bit difficult to reconcile in light of wage data. To explain this phenomenon one does not have to look very far.

The Trump administration is reportedly considering levying additional tariffs on China (an incremental $100B). Should any of these trade threats come to fruition, then domestic and global economic growth would likely slow in the near term. A slowing economic environment would translate to a more bullish stance on duration, hence the uptick in treasuries this morning. The likelihood of a trade war seems low to us, but the consequences are difficult to ascertain on an asset specific level, given that the ramifications of disrupted global trade could trigger significant contagion across risk assets. We tend to think these threats represent a piece of a broader negotiating strategy rather than a green light to proceed with an all-out trade war. The White House seems determined to hit its competition where it hurts whether it’s North Korean missiles, Chinese trade, Russian oligarchs, etc... In this particular case, the strategy appears to be intended as a means to safeguard US innovation and technology. Regardless, we are beginning to see economic signs that are becoming more indicative of late stage cycles. As always, we will keep you posted.