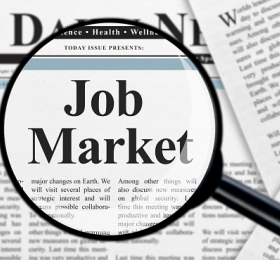 Is the sky darkening (again) in Laborland? Expectations had been building all month for a strong April hiring figure; we did NOT get that this morning. Payrolls expanded by a mere 266,0000 to start the 2nd quarter. Moreover, March jobs were revised lower by 146,000. The official unemployment rate ticked higher to 6.1% even as U6 declined to 10.4%. On the bright side, BLS restated its reading for February jobs to 536,000, which is ~41% better than originally reported. Hourly wages jumped 0.7% MoM with more than 80% of April’s jobs gains attributable to the private sector. All this to say, there is plenty of volatility in these labor figures as the world’s largest economy reopens. Certainly, today’s headline figure is disappointing compared to last month’s blockbuster report, but we must also keep in mind that the rolling 3-month average for job creation in the US is humming along at 524,000.

Jobs aside, April’s data indicate that the US economy picked up some much needed speed to start Q2— and the strength is fairly widespread with the exception of some softness in construction spending (-0.8% MoM). Stateside manufacturing and services PMI’s impressed with readings of 64.7 and 60.4 respectively. Remember the improvement in small business and consumer sentiment that we talked about last month? April retail sales jumped 9.8% in tandem with improving expectations, sentiment, and conditions at the consumer level. Personal spending also rose 4.2%. The outlook from America’s small business community continued to improve as well. Job openings (“JOLT’s”) increased to ~7.4MM in April. All-in-all we are looking at a very sound economic backdrop at this stage of the recovery. Of course, this begs the question: What about those inflationary pressures—are we there yet?

Well, that’s an interesting question particularly in light of today’s nonfarm payrolls report… core producer prices jumped 0.7% MoM, which is ALOT. On the consumer front, core prices increased 0.3% in April. Mr. Powell has stated that he expects American businesses to forego passing through the full impact of price pressures to end users. Prices for various “materials” are certainly in the spotlight. We’re looking at you lumber… AND copper… AND oil. Bottlenecks and other supply-side factors have manifest themselves in higher prices across much of the commodity complex. Demand is also coming back nicely as the world economy reopens. The primary concern for equity investors is that rising prices/ inflationary pressures will in turn create internal margin pressures that cannot be offset by topline expansion. This, of course, would result in lower earnings in corporate America and could theoretically play a role in forcing the Fed’s hand regarding the appropriateness of its “accommodative” policy stance. The former is a fundamental issue; whereas the latter presents more of a concern from a valuation perspective. Under this type of scenario, the Fed could find itself forced into a combative stance of fighting inflation rather than dismissing it as a “transient” concern, which could hypothetically trigger a repricing of risk assets. Much would need to unfold before the sky really started falling though.

For a myriad of reasons, including various structural economic forces, we are of the mindset that earnings growth will not abate anytime soon. In fact, TWP’s base case for 2021 earnings growth of >25% is still fully intact and perhaps too conservative! We could see earnings growth >33% this year. However, we would caution that in order for this to materialize Powell and Co will likely need to remain accommodative— and a little incremental dollar weakness probably wouldn’t hurt either. Call it a “Goldilocks scenario.” As an aside, the Fed’s balance sheet is quickly approaching $8T, which is the most relevant measure of Mr. Powell’s post-pandemic resolve (and stunning in its own right)! Meanwhile, option-adjusted (OAS) spreads in corporate America remain a shade below 1%, which is very benign for any “would be” borrowers, AND real US M2 just eclipsed $7.5T. Valuations certainly are NOT cheap and we can see why!